Until March 2015 in Mexico 25,821 “non-located” (“no localizadas”) persons were officially listed in the National Data Register of Missing and Disappeared Persons (Registro Nacional de Datos de Personas Extraviadas o Desaparecidas, Rndep) of the National Public Security System (Sistema Nacional de Seguridad Pública), of which 10,836 vanished in the time being of the current government. The remaining part, i.e. the majority dates back to the administration of Felipe Calderón. Regarding its methodology the governmental data base could hide hundreds of disappearances, points out a civil organization. This reality constitutes “a national tragedy”, considers Santiago Corcuera, member of the Committee on Enforced Disappearances (CED) of the United Nations (UN). 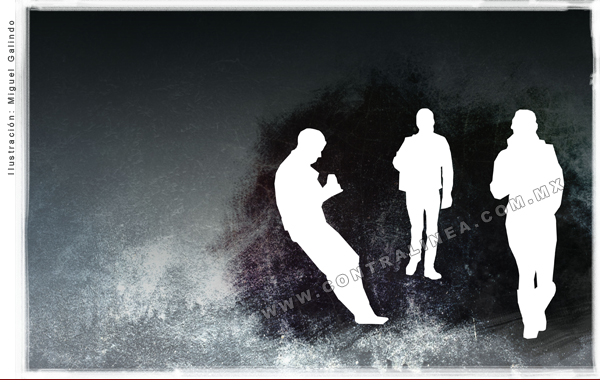 On August 2014 the Mexican Government recognized the existence of 22,611 “non-located persons”. Seven months after on March of the current year they are already 25,821.

Over 40% of those who are at the present in the condition of “non-localized” (10,836) disappeared during the current government: from January 2013 until March 2015. Meanwhile 54% (13,996) happened during the government of Felipe Calderón Hinojosa. We are dealing with persons that for the moment remain in the condition of missing, i.e. they have been found neither living nor dead. 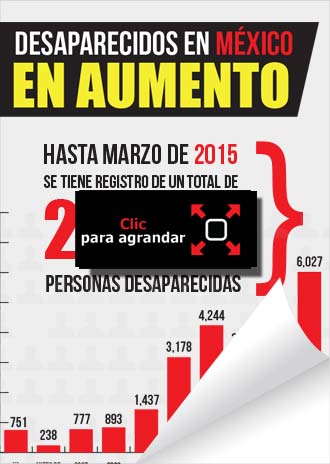 These figures are available at the National Register of Data of Missing and Disappeared Persons (Rndep) fed by the complaints presented before the law enforcement agencies, from the federal and state jurisdiction (fuero federal, común), the information instrument of the National Public Security System records only those persons that have not been found. 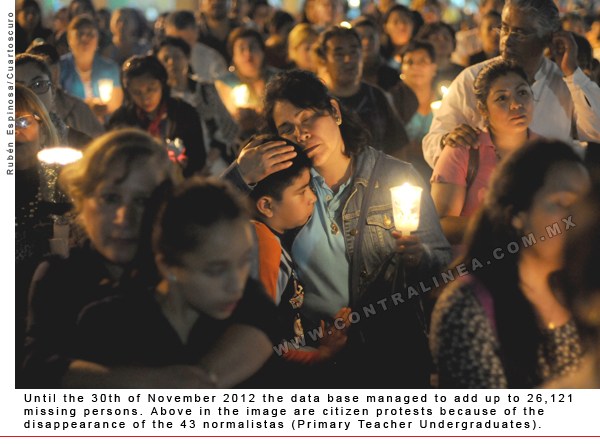 The Rnep allows us also to spot the states with the highest index of disappearances. In the first position is the State of Tamaulipas with 5,479 cases, followed by Jalisco with 2,248 cases, the State of Mexico with 2,074 cases and of Nuevo León with 2,021 cases. 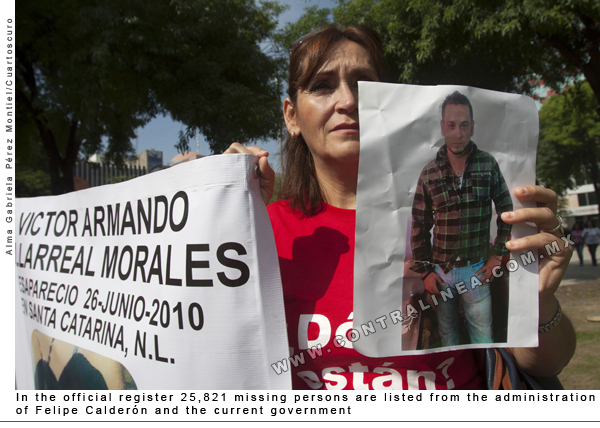 “(This is) a real tragedy”, in these terms speaks Santiago Corcuera Cabezut, member of the CED of the UN, to the dimensions reached by the phenomenon of disappearance of persons in Mexico.

In an interview with Contralínea and having made clear that the comments are made on a personal behalf, the Master’s Degree in Law by the University of Cambridge said to be in favor of developing adequate and effective measures to eradicate the disappearances, the Mexican State should recognize the magnitude of the issue, as was recommended by the Working Group on Enforced or Involuntary Disappearances of the UN in 2011.

Nonetheless until today the Mexican Government remains without recognizing the dimensions of the issue discussed, in addition to the lack of will to resolve it, states Corcuera Cabezut.

According to the former member of the CED, the origin of the tragedy of the disappearances on Mexican territory dates back to 2006, after the “spiral of violence” triggered “war on drug trafficking”, the security policy exerted by Felipe Calderón throughout the employment of Armed Forces. 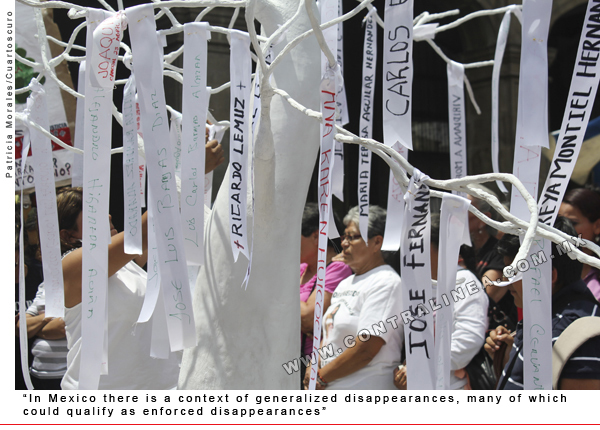 The official Register could conceal hundreds of disappearances

The Rnped does not reflect the whole totality of the disappearances occurring in the country. There are several reasons for this: it does not include those who were already found, it does not take into account those cases which lack of a complaint before the authorities; regarding the facts which concern the federal jurisdiction, it only contemplates the previous investigation started by the General Attorney’s Office of the Republic (Procuraduría General de la República, PGR) between 2014 and 2015.

A military exercise held by the Armed Forces for our Missing People in Coahuila made possible to show a degree of the dark figure of crime of the disappearances in Mexico. Out of 147 cases which are currently under inquiry in the PGR, the civil organization found out that only 23 are registered at the Rnped. According to this criterion in this case the official data base concealed 84% of the missing cases.

Added to this under-reporting of cases which do not feature in the judicial files, as explains Corcuera Cabezut, the family members and loved ones of the missing person do not always denounce. Experts say this happens mainly because of fear or for the “terrible harassment” type of treatment received when they try to expose the facts before the government department. 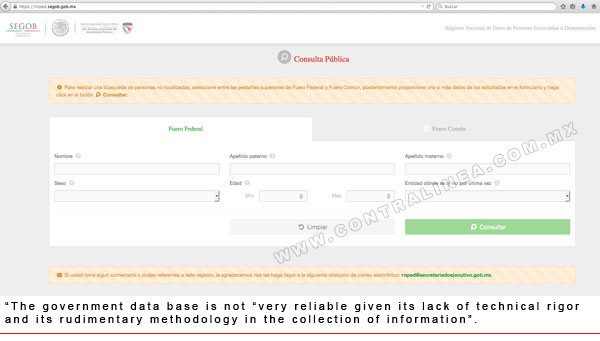 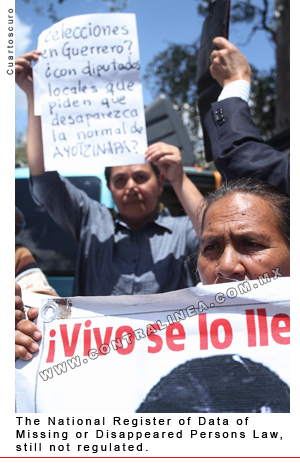 Perseo Quiroz Rendón, Executive Director of Amnesty International Mexico comments that the government data base is not “very reliable”. Given its lack of technical rigor and its ”rudimentary methodology” in the collection of information. Thereby he assures the aforementioned register does not reflect the true number of missing people nationally.

As a result of an agreement out of the National Conference on Justice Procurement in 2011, the Mexican government started to build up a data base of non-located persons based on information provided by the Public Attorney’s Office and the local Prosecutor’s Offices. Until the 30th of November 2012, i.e. in the eve of the six-year-term of Felipe Calderón, this organism managed to add up to 26,121 records.

In accordance with the information diffused by the PGR the official data base will be cleared and updated by the administration of Enrique Peña Nieto throughout the elimination of the names of the located people and of the identifications of homonyms or duplicate records. Therefore on march of the current year 25,821 cases of non-localized persons feature in the governmental register. 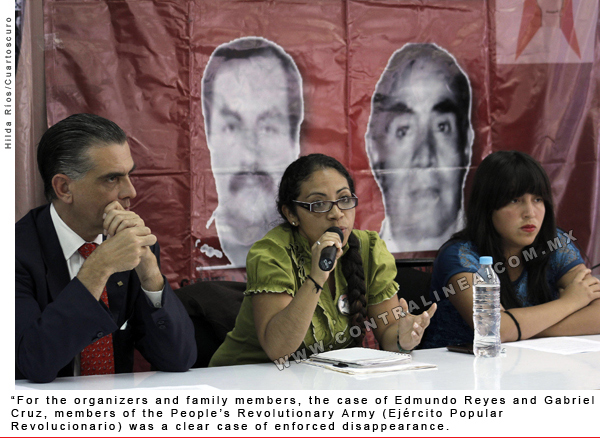 At the beginning of 2012 the National Register of Data of Missing or Disappeared Persons Law (NRDMDPL) was issued, which regulated the operation, functioning and administration of the Rnped. This execution corresponds to the federal executive branch, via the Executive Secretariat, who is compelled to publish the updated reports on its web site.

On February of last year the Committee against Enforced Disappearances of the UN manifested its concern on the lack of regulation of the NRDMDPL, and for the fact that the Rnped does not differentiate between disappearances carried out by individuals and the enforced ones, i.e. those performed by the state agents or persons or groups which operate with their consent, support or on its behalf.

“Meanwhile the Committee takes note of the NRDMDPL as it is worried of its lack of regulation, as well as the fact that the register does not include the information which would allow (it) to determine whether the person could have been a victim of enforced disappearance”. 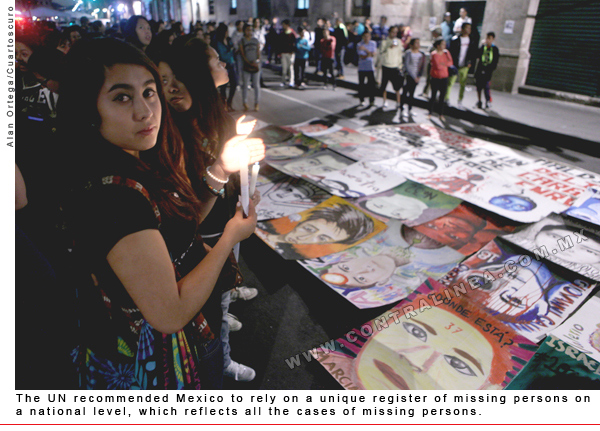 UN Experts recommend the Mexican State to rely on a unique register of missing persons on a national level, which at least reflects in an exhaustive and adequate way all the cases of missing persons, by contemplating data like gender, age, nationality as well as place and time of the disappearance, also that it should incorporate information that would allow it to determine whether we are dealing with enforced disappearances or an event without any involvement of agents of the state, that it allows to generate statistical data related with the cases of enforced disappearance, even if they were solved, that it should be completed on the basis if clear and homogeneous criteria permanently updated. 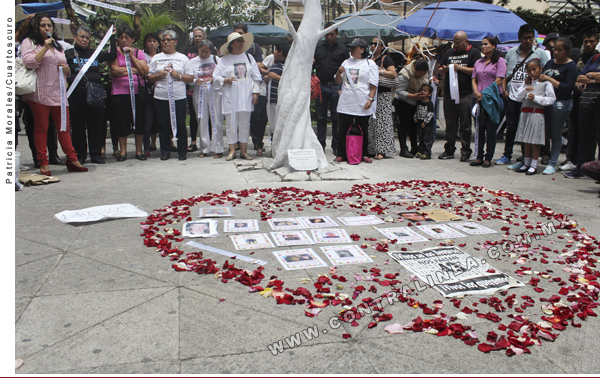 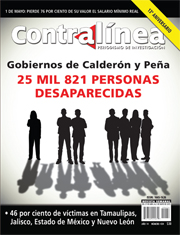