Lacking any evidence of laboratory of its own, the Federal Commission for the Protection against Sanitary Risk (Comisión Federal para la Protección contra Riesgos Sanitarios, COFEPRIS) has endorsed the “harmlessness” of the genetically modified corn, tomato, potato, cotton, soybean, rice, canola, sugar beet and alfalfa, properties of the transnational company Monsanto, Pioneer Hi-Bred, Syngenta, Bayer and Dow Agro-Sciences. The dependency assures that the transgenic breeds can be consumed by the Mexican population without any risk for their health, but their statement is based on the revision of the results provided by the very own enterprises who promote transgenic breeds, “within a clear conflicts of interests”, as consider organizations and specialists. For Antonio Serratos, expert in biosecurity, the Mexican authority limits itself to assess the risks “on paper”. Nonetheless determination of to declare these genetically modified organism harmless, the Glyphosate, a herbicide that constitutes 85% of the transgenic crops was declared as a probable cause of cancer in humans by the World Health Organization (WHO) in March 2015. 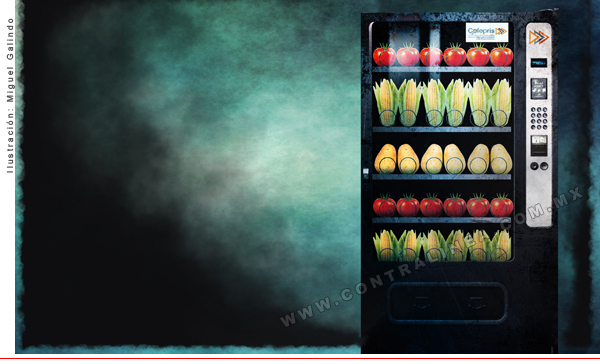 The Federal Commission for the Protection against Sanitary Risk (Cofepris) has endorsed without proofs of their own laboratories from 1995 until today 135 authorizations to transnational companies for their genetically modified organisms to be consumed by the Mexican population “without risks”. Among them are corn, tomato, potato, cotton, soybean, rice, canola, sugar beet and alfalfa, developed by Monsanto, Pioneer Hi-Bred, Syngenta, Bayer, Dow AgroSciences, Zeneca, Calgene, DNA Plant and AgrEvo Mexicana.

A document belonging to the lawsuit by collective actions against transgenic corn puts into evidence the absence of proofs on behalf of the dependency in charge of assessing the sanitary risk of genetically modified organisms destined for human consumption and use, food processing, bioremediation and public health.

“Considering the assessment issued by the Commission of Evidence and Risk Management (Comisión de Evidencia y Manejo de Riesgo) in relation with the received documentation, the authorization for the product with the commercial name of MON 89034 x NK 603(and the) scientific name Zea mays is granted”(sic), can be read in the Sanitary Authorization for the commercialization and Import of genetically modified organisms 093300C00045421, issued by the Commission of Sanitary Authorization of the Cofepris. 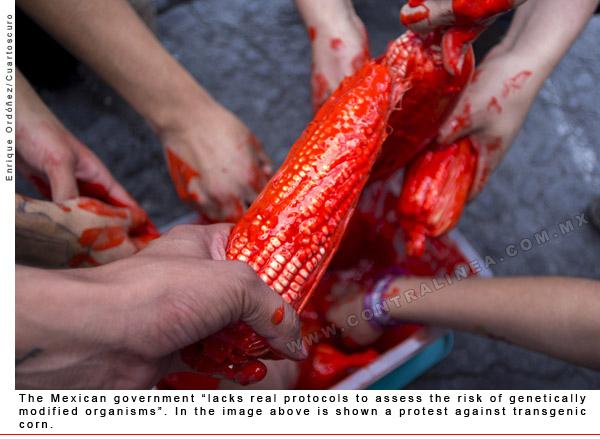 As states the official documents, of which Contralínea possesses a copy, the Cofepris only “assesses” the results of proofs performed by the transnational companies “in a clear conflict of interests”, underlines Adelita San Vicente, Director of the Foundation Semillas de la vida (Seeds of Life).

“The outlook remains dark in relation with the capacity of the Mexican government. There are no real protocols to assess the risk of these products. Desk Analysis are being produced, on paper”, refers in an interview José Antonio Serratos Hernández, expert on bio-security.

The member of the Union of Committed Scientists with Society (Unión de Científicos Comprometidos con la Sociedad (UCCS)), adviser of Greenpeace and professor at the Autonomous University of Mexico City (Universidad Autónoma de la Ciudad de México) explains that the absence of exams is not an issue limited to Mexico, but an internationally present flaw.

According to the website of the organism, the Secretariat of Health, throughout the Cofepris is performing the assessment of the studies that are drafted and presented by the interested parties (transnational companies) about their harmlessness and the potential risks of genetically modified organisms (GMO).

Thus in the terms of the Title V of the Bio-Security of Genetically Modified Organisms Act (Ley de Bioseguridad de los organismos genéticamente modificados), its regulations, and according to the guidelines established by the sanitary authorities for the procedure for the assessment of the harmlessness of genetically modified organisms, destined for the use, human consumption, food processing, bioremediation and public health.

The risk assessment process for the approval and register of GMO for human and animal consumption starts once the Cofepris receives on behalf of the GMO developing companies the authorization request, referred material and scientific information that proves the harmlessness of the product. 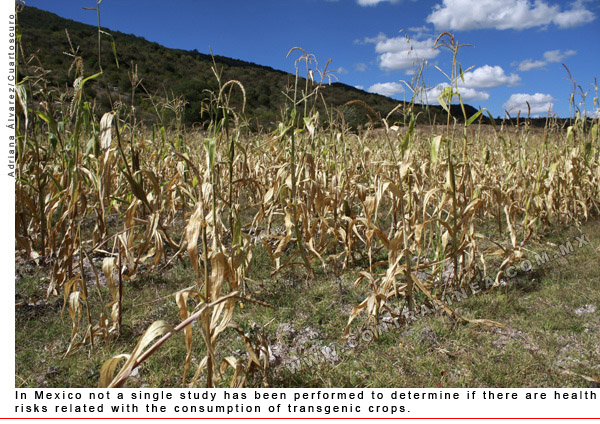 Neither the related information delivered by the transnational companies to the authorities, nor the results of the assessments, are of public access. 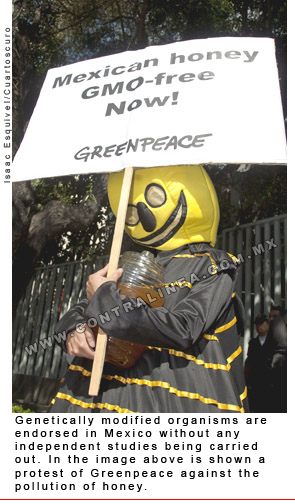 The National Commission for the Knowledge and Use of Biodiversity (Comisión Nacional para el Conocimiento y el Uso de la Biodiversidad, CONABIO) has expressed the following in this regard: “…As far as we are concerned the results are not of public access, hence in the opinion of this national commission it is impossible to pretend that different sectors of society shall be participant of the public inquiry that cites the competent authorities, and that is settled by the Bio-security of Genetically Modified Organism Act (LBOGM in its initials in Spanish) as compulsory if the minimally required elements to form an opinion based on information, when lacking the access to the information resulting from previous releases.”

The Network for the Defense of Corn (Red en Defensa del Maíz), the Via Campesina (The Peasant’s Way, an international peasant’s movement), the  UCSS, Greenpeace, the ETC Group, the Group for Environmental Studies, the Assembly of the Environmentally Affected, the Research Group for the Change in the Mexican Countryside, Green, the Power of the Consumer and To the Consumer, are some organizations that in an proactive way demand the Mexican government to promote exhaustive, transparent and public proofs of the health and environmental threat, as well as to promote the revision of transgenic lines that are solicited to be planted as of the regulation process that brought to its approval.

They denounce that in Mexico not a single case study has been done to know about health risks of any type of transgenic crops.

With regards to the topic Antonio Turrent Fernández –member of the Directive Council of the UCCS and national emeritus researcher- asks himself why the government does not call for national researchers without any conflicts of interests to investigate instead of a de facto approval. “They don’t want to do it. Ideally a research should be made on every line approved. These are costly investigations, but from the point of view of a government that is looking after the health of their citizens it should be done: 112 million inhabitants have the right that 50 million pesos are spent on our health. If it was 100 or 500 million pesos would merit it, but more has been spent in corruption of the Estela de Luz (enigmatic corruption-stained building of Calderon’s presidency)”.

In June 2002 the Cofepris –a decentralized administrative body of the Secretariat of Health- authorized the corn MON-00603-6 of Monsanto, also known as MON 603, property of Monsanto.

The gen no. 603 present in the DNA of the MON-00603-6 corn is an object of worldwide scientific scrutiny.

The 19th of September 2012 the Committee for the Investigation and Independent Information on Genetic Engineering (CRIIGEN for its initials in French) presented in a press conference in London, UK, the results of an investigation led by the molecular biologist Gilles-Éric Séralini, Professor at the French University of Caen. 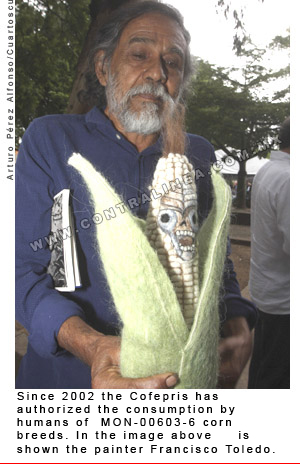 From 2009 to 2011 a team of scientists fed 200 rats with NK603, a genetically modified corn developed to resist the glyphosate, active ingredient of Roundup –the most sold herbicide of Monsanto that in 2000 saw its patent expire-, with NK603 corn treated with Roundup, with non-modified corn, and with water mixed with Roundup Glyphosate.

The results published internationally by the magazine Food and Chemical Toxicology, revealed that these animals suffered from a premature death, developed tumors and had serious hepatorenal diseases.

According to the study –financed by the Ceres Foundation that accounts on funds of 50 companies that don’t produce genetically modified organisms and by the Charles Leopold Meyer Foundation for the Progress of Humanity, whose cost ascended to 3 million euros-, the transgenically fed rats registered serious malformations no sooner than the 13th month.

The investigation of the Professor Séralini and its team of collaborators of the Committee for the Investigation and Independent Information on Genetic Engineering is the first long term attempt to study genetically modified organisms.

Monsanto endorsed its product after only 3 months of study. By the fourth month the bodies of the rats of Séralini started to show severe damage, which makes the investigators and experts all over the world think that the transnational company is aware of the health risks that represent the consumption of its products.

Despite that the findings of the experts of the University of Caen, France and Verona, Italy, published in the magazine Food and Chemical Toxicology in September 2012, reveal that the rodents developed tumors, malformations and even suffered of premature death, the Cofepris dismisses those results.

Furthermore the federal dependency has failed to review the assessment that endorses the harmlessness of corn and genetically modified organisms that require the use of glyphosate.

“Once having reviewed the article (Séralini, G-E, et al. “Long term toxicity of a Roundup herbicide and a Roundup-tolerant genetically modified maize. Food Chem. Toxico”) it can be said that it has several methodological flaws that call into question the handling of the study. The European authority itself has dismissed the aforementioned study and cites the researcher to clarify to clarify publicly several doubts”, responds the body to Contralínea throughout an official document with official logotypes.

In a document sent by Rosalba Villanueva, the Press Officer of Cofepris, adds that “the issue NK603 was approved by the Cofepris, as it expresses the CP4 EPSPS protein in corn, which does not represent toxicity nor allergens, according to the homologated comparison with known proteins of toxins and allergens.

“Additionally there were no adverse effects in the severe toxicity tests with animals (50 males, 50 females) receiving doses above 400mg/kg of the CP4 EPSPS protein.

“The transgenic issue called NK 603 Corn Roundup Ready, that finds itself authorized by [the] Cofepris since 2002, has been characterized to be tolerant to the glyphosate herbicide, i.e. when the corn is sown in the fields, if it is fumigated with glyphosate, the undesired weed dies but the corn tolerates this herbicide, therefore it could be developed as it will have more nutrients while the weed is eliminated”.

Despite the fact that the Social Communication Department sent a written reply, the interview requested by Contralínea to the head of Cofepris, Mikel Arriola was never granted. 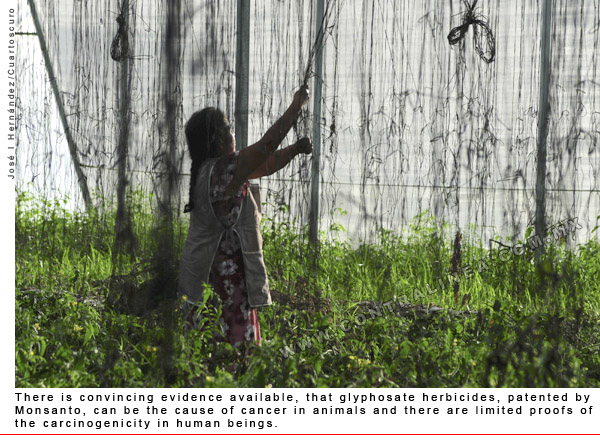 The Glyphosate is carcinogenic for human beings, warns the WHO

Albeit the version of Cofepris, on the 20th of March 2015 a group of 17 experts of 11 countries of the International Agency for Research on Cancer (IARC) of the World Health Organization (WHO) published in the scientific magazine The Lancet Oncology the results of the assessments of the carcinogenic potential of five organophosphate pesticides and herbicides: Tetraclorvinphos, Parathion, Malathion, Diazinon and Glyphosate.

Based on exposition studies, mainly of agricultural type  in the USA, Canada and Sweden, the five assessed pesticides were classified as probable and possible carcinogenic factors for human beings. The group of the WHO found sufficient evidence of damage in the DNA as well as chromosomal damage in human cells held in vitro.

“For the herbicide glyphosate   there is convincing evidence that it can cause cancer in laboratory animals and there is limited evidence of carcinogenicity in human beings. It also caused chromosomal damage to the DNA and to human cells.”

Developed and patented by Monsanto in 1974, the glyphosate is one of the agro-toxics with the biggest volume of production and use in the world, as recognizes the WHO in its reports according to the ETC group, which is used in 85% of transgenic crops. 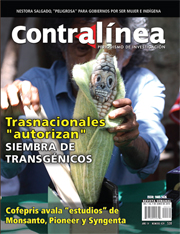