Menu
By all possible means, the political leaders of the United States attempt to make the economic crisis they face invisible. While a few weeks ago, the President of the Federal Reserve System (Fed), Janet Yellen, insisted that the federal funds rate will increase this year, now it appears that this will not happen until the first quarter of 2016, when the Fed will begin to close the faucet of global liquidity. 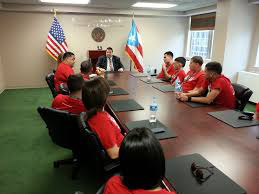 The fall in prices (deflation) –a consequence of the fall in the profit rate– the extreme weakness in the prospects of investment, the volatility of financial markets, product of the economic debacle of Greece and the countries castigated by the euro zone crisis, the drop of the stock market in China, are factors that, according to Yellen, put off the decision until next year.
It is obvious that the United States is more inclined to look for the guilty outside rather than look inside their own country to resolve their crisis. The deterioration of Silicon Valley, Detroit, West Virginia, Mississippi, Alabama, as well as the fiscal mess of the island of Puerto Rico are symptomatic signs of the economic decadence of the US, that even though Washington has paid little attention in recent years, now begin to appear in the mass media.
The case of Puerto Rico is, by a long way, the better known. Even voices such as that of Hillary Clinton (pre-candidate for the Presidency of the US in the Democratic Party) look to find electoral advantage echoing the crisis that, according to her words, should be immediately resolved through the support of the so-called American Union.
For nearly ten years the island of Puerto Rico is sinking in a sea of debts. These now amount to some 70 billion US dollars, an amount that is equivalent to over one hundred per cent of its Gross Domestic Product (GDP).
What explains this high level of debt? In addition to being a world class tourist centre, the economy of Puerto Rico has been based on manufacturing, above all from the pharmaceutical industry. Nevertheless, the place of Puerto Rico in that industry began to slide due to competition from Asia and Eastern Europe, which gained ground due to labour productivity and scientific development since the mid-1960s.
Already in the following decade, the oil crisis provoked by the Organization of Petroleum Exporting Countries (OPEC) brought the US to oblige the island to apply fiscal legislation to increase the profit of US companies. In this way, since 1976, the multinational corporations installed in the island were exempt from taxes on their profits, a situation that marked the beginning of their fiscal weakness.
Nevertheless, capitalist globalization from the decade of the 1990s ended up undermining the manufacturing sector of the country. The North American Free Trade Agreement (NAFTA) led to massive export of capital to Mexico and Canada, countries that were disposed to establish better conditions of exploitation for North American capitalists compared to Puerto Rico: lowering of taxes, stagnation of wages, environmental deregulation, etc.
Slowly the Puerto Rican economy began its long decline. To top things off, at the beginnings of the XXI century, the island suffered a grave mortgage crisis, the result of state deregulation, as well as the consequences of the incorporation of China in the World Trade Organization (WTO) in 2001, an event that led to undermining the competitiveness of the productive activity of the Caribbean island.
Thus in 2006, overwhelmed by the slow growth of their GDP, the government of Puerto Rico decided to eliminate the system of fiscal exemption. But the cure was worse than the illness. That same year the economy went into recession. Since then the country has been the victim of a crisis of enormous proportions, as a result both of the closing of companies and the massive emigration of people to the United States in search of employment.
Unemployment in Puerto Rico is alarming. At the present time the rate is 14%, almost three times the national average (5.5%). Because of the slow perspectives of the economy, some 50,000 emigrate annually. The island has 3.5 million inhabitants, while some 5 million Puerto Ricans live on US territory (a fifth of them in the state of Florida). There is no doubt that fewer persons believe in a future for the country.
In the face of the decline of the economy and lower income from taxes, the government of Puerto Rico –mistakenly– opted for tax increases, cutting public expenditures and increasing the emissions of bonds. It is obvious that it will be impossible to maintain this strategy indefinitely. These measures only contribute to increase the debt, undermine the economy and limit the resources at the disposition of the government even further.
After the bankruptcy of Detroit, investors were wary of municipal bonds, and with this the prime interest risk of Puerto Rican bonds increased, severely limiting their access to credit markets.
Even though the authorities have, in recent months, demanded a restructuring of the debt, to this date nothing has been done. After the negative response of the White House the economic interests of the powerful investment funds (Franklin Templeton, OppenheimerFunds, etc.) who tend to push governments against the wall through financial speculation, activities known as vulture funds.
Between 2006 and 2013 the island emitted more than 60 billion US dollars in bonds, that produced nearly 1.5 billion US dollars in fees for Wall Street bankers and big business for law firms that defend the cashing of fraudulent debts.
In other words, Puerto Rico has gained little from the US government, more disposed to safeguard the profits of bankers than to support debt relief and economic recovery in municipalities and colonies punished by the crisis.
Versión en español: Puerto Rico en el huracán de la crisis
Translation: Jordan Bishop
– Ariel Noyola Rodríguez is an economist graduated from the National Autonomous University of Mexico. Contact: [email protected]. Twitter: @noyola_ariel.